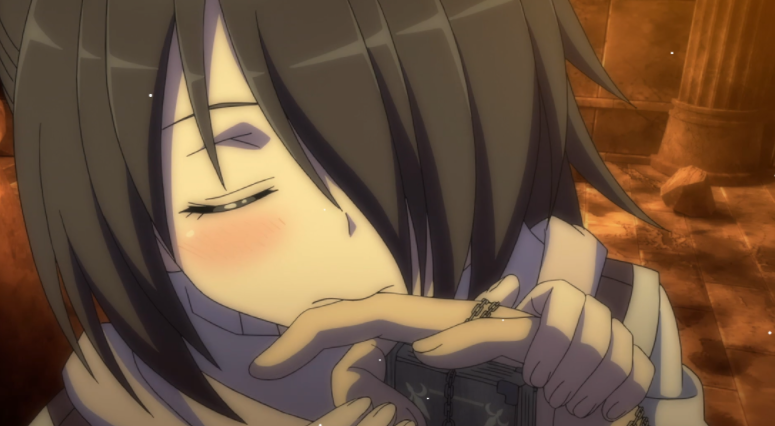 Summary by Edy: Everyone is sleeping for some reason. Yui is about to wake up!!! Super powerful women. Dark ugly demons. Can’t use guns any more. Ninja girl cool. Dragon shadow thing in Yui’s room. “Strongest thing” Temporary truth for the two. To save hijiri. Use Lilith’s spell but can turn into a monster like that dragon. I am not scared! Make a book like a gun. Used guns to beat the strongest thing.

I think this episode is arguably the one that’s most packed with story and content, and yet it’s the episode that I’m least excited to write about. Maybe this is why the previous episode started with a beach episode instead….

So there were some dragons and monsters and stuff, but let’s first talk about the scene in the dark, where mc accidentally gropes Lilith.

Yeah I thought that scene was hilariously bad. Since for the audience the room is really bright so we can see everything. But the main characters who have magical powers can’t see anything and end up being groped. It’s one of the worst things cinematographically seen in my life.

Putting technical aspects and whatever aside, these kind of scenes is more of what I expected Trinity Seven to be like. Random groping scenes came up like once last episode, but they were more frequent this time. Personally I’m not a fan of them, but there seems to be a lot of them in Ecchi Anime for some reason

As I wrote on “the appeal of ecchi shows” (hyperlink) I find them extremely hilarious. But man the way they do these are so bad. Though I did see the best thing I saw the day I watched this episode: Yui. She’s so cute.

Because she’s a loli?

Sure, but she’s the best girl for you since she’s a loli, right?

I think the thing that I remember most about this episode was when there suddenly starts to be a hype up about how strong Levi is going to be, and someone says she’s in like the top 5 or something.

And then the main characters meet up with blondie and black hair, and then they prepare to fight each other

And we’re like oh shit, what’s her power going to be??

But then it turns into a panty shot,

The opponent girl gets embarrassed, and then everyone just runs away and the fight scene ends.

Wha
What?
Was that her thema??
Skirt flipping???

Anyway that scene was pretty funny, whether it was intended to be so or not.

We then see the guy finally create his gun after the tremendous struggles he went through for the episode. It was pretty hilarious how the guy starts doing these chants that we never see him doing previously. Jun and I immediately wondered if the guy was learning behind the scenes or something because of how sudden the change from knowing nothing to doing these long chains of chants.

Yeah. I’m never really that big of a fan of timeskips since we miss out on witnessing the characters grow, but a line thrown in about how it’s been a while since the last episode or how the MC has learnt some actual magic and stuff would’ve made the scene a little less “haha what the fuck?”

Another hilarious thing about this episode was when they said the dragon is the strongest of these shadow monsters. We are on episode 4 and the guy just unlocked his gun thing and he ends up beating it up in one gun shot. At least we know exactly how the rest of the show will go on now in action scenes…

But putting all the complaining that I’ve done aside,

In this scene I got to hear Ayaneru voicing shitty eroge sound effects, so all things said, I think this episode was very worth watching.

Oh, and this was the episode with Shavadava in Amazing.