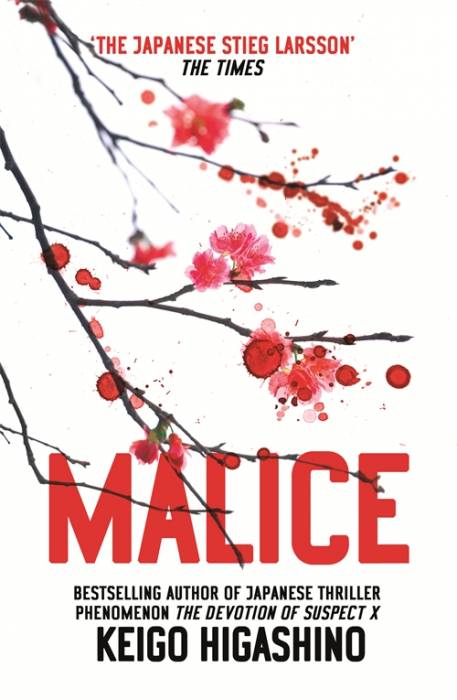 Before any spoilers. This book is really fucking good. So many twists and turns, genius writing tactic and style, incredible characters. Please go read it. It is an absolute masterpiece.

I’ll say before I talk about the book that I’m not a very avid reader– unless you include manga, this is probably the first novel I’ve read in maybe even a year. The novel medium has never really felt that special to me, and books that I enjoyed recently had lots of scenes with descriptive imagery that I personally felt would have simply been better if adapted into a visual medium, but of course not all works can be adapted, and sometimes the writing/story is still too good to give up.

Malice, on the other hand, is a book that I cannot imagine being better adapted in another medium. Instead of trying to make up for the lack of visuals in its written medium, it takes advantage of it, and constantly makes the audience reconsider and rethink the assumptions and imagery they’ve made while reading, that would simply be too convoluted and confusing to be translated into a visual medium.

The biggest part of that, I think, comes from the way the book is structured. Malice mainly has 3 big stages divided into two sections from Nonoguchi and Kaga. Nonoguchi’s section is the report that he has been writing to “remember such shocking events” while Kaga’s section is basically a police, holistic review of the situation through the analysis of the Nonoguchi’s reports. Of course, with this, it’s really hard to get the biased perspective of a written report for Nonoguchi in a media format.

So let’s dive a little bit into each section. How did you feel after reading the first parts of the book?

Admittedly the first chapter in my opinion wasn’t too compelling. There were some interesting moments like how Hidaka talks about killing the cat, and the reveal about what exactly we as the audience are reading, but it didn’t grab my attention too much and get me excited to turn to the next page.

Definitely. It took me like a good 10 days to get through the first section but I finished the rest of the book in a day after that change of pace in the second section with Kaga. Though I can say, after finishing the book it makes sense the trash that Nonoguchi writes isn’t that compelling. Maybe that was intended, maybe it wasn’t.

10 days?! I don’t think that’s the book’s problem at that point…

But in the second chapter, we’re introduced to the idea that the first chapter may have just been complete bull shit, and that the narrators in this book may not be reliable. Personally I’m a huge fan of stories that use unreliable narrators, though for the same reason that I wrote before, I think they can only really work properly in non-visual mediums as otherwise it’s extremely difficult to rethink vivid imagery you have of the story as lies(the best example I can think of is the Monogatari Series). Anyways, when the idea of an unreliable narrator came out, I immediately thought that we’d also be given ideas that Kaga wasn’t a reliable narrator either(though you wouldn’t have had this idea if you’ve read Higashino Keigo’s other books, as Kaga is a recurring character). When it turned out that the first unreliable narrator introduced was indeed, the culprit, I was somewhat disappointed. I thought that the idea of unreliable narrators would be explored more in depth. Turns out that Higashino Keigo is a fucking genius, and the idea is explored much more than I initially thought it would be, all to be revealed in the incredible ending chapter.

Definitely. By the end of the second section, going back into Nonoguchi’s accords, I was kind of excited to really find the reason why he killed the guy and to properly get invested in his character. I even felt really bad for his love story with Hidaka’s wife. The ghost writer story all felt so believable too since that was the central argument that Kaga had for his motives. Whether or not Nonoguchi could write well, he sure did paint Hidaka as an evil monster and brought out sympathy really well.

Yeah, reading the confession chapter was probably the most difficult part of reading this book. I felt fucking pissed at some of the parts reading how much of an evil bastard Hidaka was potrayed as, all throughout the entire book. And that portrayal is what really set up the end.

Man the end. The ending was definitely a shocker. Every part of the show that I was a little bit confused about, or thought the writer messed up on, all came back at the end. The knife, for example, just had Nonoguchi’s fingerprints without Hidaka. I was wondering whether or not Hidaka prepared gloves or something to prevent his finger prints from going on the knife, since it wasn’t directly mentioned. The part when Nonoguchi saids there are books that he was keeping felt also strange since Nonoguchi continued to avoid talking about the case or motive at all until then. But at the end, all of this rapidly picks up. The best part about the ending to me is how we never get to hear Nonoguchi talk genuinely. The mistakes that we read in Nonoguchi’s stories all come together in an epic monologue. And it clearly accomplishes two things: one, making Detective Kaga seem more genius yet arrogant to establish his character for other books in the series and two, killing any thought of character that the readers may have had about Nonoguchi.

Yeah, I definitely agree that the way we never really see Nonoguchi’s ‘true self’ is really really interesting. Throughout the novel we are constantly thinking, “this time I actually get to know what Nonoguchi is like,” but everytime the reader is fooled. In the last chapter, where after three chapters of cockblocking us readers, the truth is finally revealed, it’s a complete monologue by Detective Kaga. There’s some hints that Nonoguchi moves or has some sort of reaction, but we never see beyond what Kaga says in that moment. And after the entire explanation by Kaga, the novel ends, without any continuation of Nonoguchi’s account. The way that ultimately, we never really see what Nonoguchi was like as a person with his mask off is just such an exciting idea to me, especially after such badass reveals.

I talked about it a little in the beginning, but this book really does masterfully make you constantly reconsider what you’ve been thinking and believing until then. In the first chapter he’s a curious writer whose friend has died that doesn’t leave you with much of an impression. In the second chapter, where he talks about how Kaga ‘caught’ him, he then changes into a pathetic man trying to cover up his murder. While reading the confession chapter, he very quickly changed in my mind as a psychopath to an extremely pitiable and sympathizable character. This is maximized in the interview chapters where everyone’s account of Nonoguchi varies from slightly different to almost a different person. Nonoguchi constantly changes in our minds and our idea of him becomes more and more unstable and hazy.  And by the end after the reveal, he’s practically a complete stranger to us. He’s revealed to be much, much, more conniving and intelligent than we had ever imagined, and more emotional than any of the interviews would have led you to believe.

Seriously, they are geniuses. All three of Kaga, Nonoguchi, and Keigo are geniuses. The plan was obviously incredible. Honestly Nonoguchi should have gotten away with that genius idea. As for Kaga, on the other hand, I don’t understand how he pieced everything together. And the way Keigo made Nonoguchi’s plan so perfect yet has holes that are incredibly hard to find yet understandable holes, is just absolutely amazing. Seriously, I can’t stop praising how he tied in his accounts to Kaga’s solutions so well.

If there’s one thing that I had to complain about with this book, I’d say that it’s the second last chapter, chapter 8. The one where we learn about Kaga’s backstory as a detective. I’m guessing that since he’s a recurring character, if I had been more invested in Kaga perhaps this chapter would have been more enjoyable. But as for now, the chapter is more like a tease for the big reveal that the readers can feel is coming next.

The first book in the “Detective Kaga” series is called Graduation. We also obviously know that he worked at a school before and that one of his students, who was bullied, stabbed the person that they bullied. We were never really given a satisfying reason why the guy who bullied wasn’t killed when that may have made it more traumatic or impactful. Maybe he wanted to give a direct comparison to Nonoguchi, another perpetrator of bullying. But since we haven’t read Graduation yet, we will never really know what happened to Kaga or the guy until we do.

I don’t know when we will have our next book review, but I’m sure it will be another Higashino Keigo Book (probably The Devotion of Suspect X) but as always, thank for reading!