Episode 6 and 7 were both delights. While watching episode 5, I said that I’d probably enjoy watching the three of the characters talk with white background for a few hours. And these episodes (especially episode 6) were the closest that we ever got to that. Both of the episodes continue to have the fun conversations with the three core characters (whom I continue to repeat how interesting of a character dynamic that they have) and the little cut in for explanations are still enjoyable.

The focus of both episodes continued to be within the Nanase Case. In episode 6, the team went to the crime scene where the death happened with the help of ghosts there and in episode 7, the team researched the death of a police guy. Individually the episodes were both fun.

Episode 6 was mainly a repetition of everything that we know except we got to see how Kotoko solves cases. Talking to ghost things wasn’t anything out of expectations and was something that I was expecting her to do. We saw Saki shaking in fear and Kotoko casually cheering up the depressed ghost. This is just what the show has been throughout 6 episodes. But of course, we got to see Magical Girl Kotoko so that whole scene was completely worth it. What was new was the slight glimpse of the past that we got to see with a more clear description of Kuro’s abilities. I think both were interesting additions, but nothing much is to be said about the two other than how smile provoking the conversation between Kotoko and Kuro was.

Episode 7 was really fun to watch especially visually. In Kotoko’s room, we got to see her eyes and legs disassembled. The most interesting thing about this that happened without much mention was how Kotoko acts extremely casually without her legs or legs around Kuro, but puts them back on when Saki came in her room. This causality that was seen with Kuro putting his hands on Kotoko’s legs and now this, really makes me want to know what happened between the time skip. 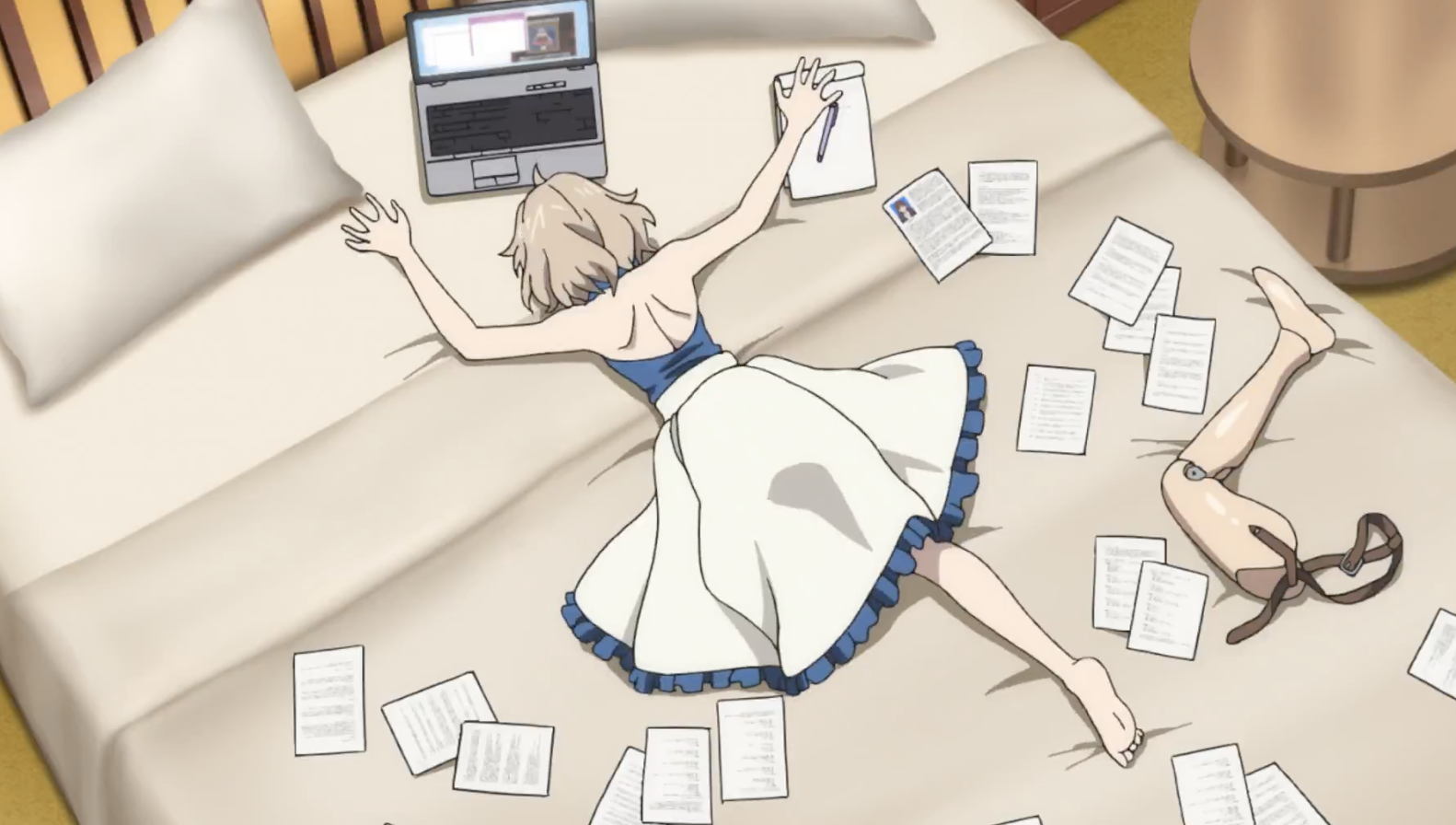 I’m a little bit conflicted about the police guy dying. I mean I’d be surprised if anyone was shocked too much by him dying. He served almost no purpose in the story other than the occasional dialogue with Saki and he was extremely boring anyways. So in that sense, I am a little bit happy that they moved the story forward by killing him. But, I am a little bit disappointed that his sole purpose was to die. I guess that impact was why they gave him empty screen time without too much importance. I kind of just feel like I wasted my time watching that dialogue.

Other than that, the episode’s content was much in line with how the show has been for a while. Obviously, the police guy dying made the rumours worse making the ghost more powerful than before. The whole arc has been a lot of generic that I would have liked it to be, but hopefully the resolution is interesting enough. Kuro does provide an interesting option in episode 7 about attempting hundreds of solutions which does sound interesting.

My problem with both of the episodes is that I am finding all of this pretty repetitive. We’ve been looking at this Nanase Case for 4ish episodes up until now, but no new information to the case has really been given. Most of the exposition is just a repeat of everything that has been said in the previous episode with the slightest alteration due to an event. In the end, even that alteration ends up being the same explanation of the same information. Hopefully this gets resolved soon…